The Looming Mass Destruction From Derivatives 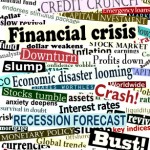 Increased regulation and low interest rates are driving lending from the regulated commercial banking system into the unregulated shadow banking system. The shadow banks, although free of government regulation, are propped up by a hidden government guarantee in the form of safe harbor status under the 2005 Bankruptcy Reform Act pushed through by Wall Street. The result is to create perverse incentives for the financial system to self-destruct.

Five years after the financial collapse precipitated by the Lehman Brothers bankruptcy on September 15, 2008, the risk of another full-blown financial panic is still looming large, despite the Dodd Frank legislation designed to contain it. As noted in a recent Reuters article, the risk has just moved into the shadows:

“[B]anks are pulling back their balance sheets from the fringes of the credit markets, with more and more risk being driven to unregulated lenders that comprise the $60 trillion “shadow-banking” sector.”

Increased regulation and low interest rates have made lending to homeowners and small businesses less attractive than before 2008. The easy subprime scams of yesteryear are no more. The void is being filled by the shadow banking system. Shadow banking comes in many forms, but the big money today is in repos and derivatives. The notional (or hypothetical) value of the derivatives market has been estimated to be as high as $1.2 quadrillion, or twenty times the GDP of all the countries of the world combined.

According to HervÃ Hannoun, Deputy General Manager of the Bank for International Settlements, investment banks as well as commercial banks may conduct much of their business in the shadow banking system (SBS), although most are not generally classed as SBS institutions themselves. At least one financial regulatory expert has said that regulated banking organizations are the largest shadow banks.

The Hidden Government Guarantee that Props Up the Shadow Banking System

According to Dutch economist Enrico Perotti, banks are able to fund their loans much more cheaply than any other industry because they offer “liquidity on demand.” The promise that the depositor can get his money out at any time is made credible by government-backed deposit insurance and access to central bank funding. But what guarantee underwrites the shadow banks? Why would financial institutions feel confident lending cheaply in the shadow market, when it is not protected by deposit insurance or government bailouts?

Perotti says that liquidity-on-demand is guaranteed in the SBS through another, lesser-known form of government guarantee: “safe harbor” status in bankruptcy. Repos and derivatives, the stock in trade of shadow banks, have “super-priority” over all other claims. Perotti writes:

“Security pledging grants access to cheap funding thanks to the steady expansion in the EU and US of “safe harbor status”. Also called bankruptcy privileges, this ensures lenders secured on financial collateral immediate access to their pledged securities. . . .

“Safe harbor status grants the privilege of being excluded from mandatory stay, and basically all other restrictions. Safe harbor lenders, which at present include repos and derivative margins, can immediately repossess and resell pledged collateral.

“This gives repos and derivatives extraordinary super-priority over all other claims, including tax and wage claims, deposits, real secured credit and insurance claims. Critically, it ensures immediacy (liquidity) for their holders. Unfortunately, it does so by undermining orderly liquidation.”

When orderly liquidation is undermined, there is a rush to get the collateral, which can actually propel the debtor into bankruptcy. The amendment to the Bankruptcy Reform Act of 2005 that created this favored status for repos and derivatives was pushed through by the banking lobby with few questions asked. In a December 2011 article titled ” Plan B — How to Loot Nations and Their Banks Legally,” documentary film-maker David Malone wrote:

“This amendment which was touted as necessary to reduce systemic risk in financial bankruptcies . . . allowed a whole range of far riskier assets to be used . . . . The size of the repo market hugely increased and riskier assets were gladly accepted as collateral because traders saw that if the person they had lent to went down they could get [their] money back before anyone else and no one could stop them.

Burning Down the Barn to Get the Insurance

Safe harbor status creates the sort of perverse incentives that make derivatives “financial weapons of mass destruction,” as Warren Buffett famously branded them. It is the equivalent of burning down the barn to collect the insurance. Says Malone:

“All other creditors — bond holders — risk losing some of their money in a bankruptcy. So they have a reason to want to avoid bankruptcy of a trading partner. Not so the repo and derivatives partners. They would now be best served by looting the company — perfectly legally — as soon as trouble seemed likely. In fact the repo and derivatives traders could push a bank that owed them money over into bankruptcy when it most suited them as creditors. When, for example, they might be in need of a bit of cash themselves to meet a few pressing creditors of their own.

“The collapse of . . . Bear Stearns, Lehman Brothers and AIG were all directly because repo and derivatives partners of those institutions suddenly stopped trading and “looted’ them instead.”

The global credit collapse was triggered, it seems, not by wild subprime lending but by the rush to grab collateral by players with Congressional-approved safe harbor status for their repos and derivatives.

Bear Stearns and Lehman Brothers were strictly investment banks, but now we have giant depository banks gambling in derivatives as well; and with the repeal of the Glass-Steagall Act that separated depository and investment banking, they are allowed to commingle their deposits and investments. The risk to the depositors was made glaringly obvious when MF Global went bankrupt in October 2011. Malone wrote:

“When MF Global went down it did so because its repo, derivative and hypothecation partners essentially foreclosed on it. And when they did so they then “looted’ the company. And because of the co-mingling of clients money in the hypothecation deals the “looters’ also seized clients money as well. . . JPMorgan allegedly has MF Global money while other people’s lawyers can only argue about it.” 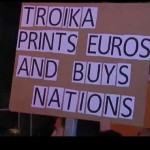 MF Global was followed by the Cyprus “bail-in” — the confiscation of depositor funds to recapitalize the country’s failed banks. This was followed by the coordinated appearance of bail-in templates worldwide, mandated by the Financial Stability Board, the global banking regulator in Switzerland.

The Auto-Destruct Trip Wire on the Banking System

Bail-in policies are being necessitated by the fact that governments are balking at further bank bailouts. In the US, the Dodd-Frank Act (Section 716) now bans taxpayer bailouts of most speculative derivative activities. That means the next time we have a Lehman-style event, the banking system could simply collapse into a black hole of derivative looting. Malone writes:

“. . . The bankruptcy laws allow a mechanism for banks to disembowel each other. The strongest lend to the weaker and loot them when the moment of crisis approaches. The plan allows the biggest banks, those who happen to be burdened with massive holdings of dodgy euro area bonds, to leap out of the bond crisis and instead profit from a bankruptcy which might otherwise have killed them. All that is required is to know the import of the bankruptcy law and do as much repo, hypothecation and derivative trading with the weaker banks as you can.

“. . . I think this means that some of the biggest banks, themselves, have already constructed and greatly enlarged a now truly massive trip wired auto-destruct on the banking system.”

The weaker banks may be the victims, but it is we the people who will wind up holding the bag. Malone observes:

“For the last four years who has been putting money in to the banks? And who has become a massive bond holder in all the banks? We have. First via our national banks and now via the Fed, ECB and various tax payer funded bail out funds. We are the bond holders who would be shafted by the Plan B looting. We would be the people waiting in line for the money the banks would have already made off with. . . .

“. . . [T]he banks have created a financial Armageddon looting machine. Their Plan B is a mechanism to loot not just the more vulnerable banks in weaker nations, but those nations themselves. And the looting will not take months, not even days. It could happen in hours if not minutes.”

There is no way to regulate away this sort of risk. If both the conventional banking system and the shadow banking system are being maintained by government guarantees, then we the people are bearing the risk. We should be directing where the credit goes and collecting the interest. Banking and the creation of money-as-credit need to be made public utilities, owned by the public and having a mandate to serve the public. Public banks do not engage in derivatives.

Today, virtually the entire circulating money supply (M1, M2 and M3) consists of privately-created “bank credit” — money created on the books of banks in the form of loans. If this private credit system implodes, we will be without a money supply. One option would be to return to the system of government-issued money that was devised by the American colonists, revived by Abraham Lincoln during the Civil War, and used by other countries at various times and places around the world. Another option would be a system of publicly-owned state banks on the model of the Bank of North Dakota, leveraging the capital of the state backed by the revenues of the state into public bank credit for the use of the local economy.

Change happens historically in times of crisis, and we may be there again today.

Ellen Brown is an attorney, president of the Public Banking Institute, and author of 12 books, including WEB OF DEBT and its newly-released sequel, THE PUBLIC BANK SOLUTION. Her websites are http://WebofDebt.com, http://PublicBankSolution.com, and http://PublicBankingInstitute.org.

The Big Banks Got Away With Hundreds of Billions

Despite Overwhelming Evidence of Massive Fraud

Frontline’s recent hour long documentary called “The Untouchables” traces the banking fraud from start to finish.  The big banks made hundreds of billions (if not TRILLIONS) of dollars packaging up mostly bad loans to sell to “investors”, many overseas but also to American pension funds.  These packages, called “Derivatives” were packed with bad mortgage loans, complete fraud.  The big bankster executives got a free pass from President Obama’s Justice Department, who went after a few low level criminals but let the all the big boys off the hook.  Please watch this compelling and completely documented report:  CLICK HERE.

Now We Know – The Truth Is Out!